Husky Vs Wolf | Are Huskies Related to Wolves? 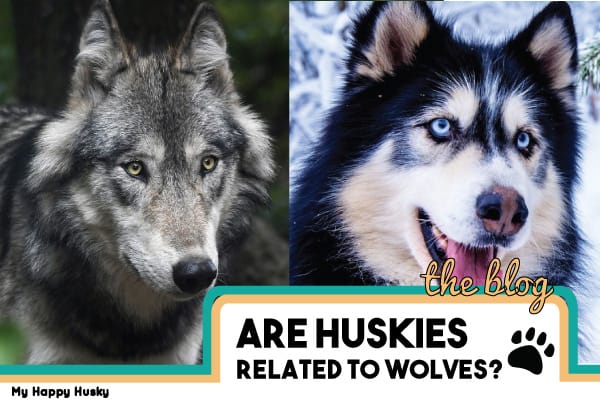 Let’s take a closer look at one of the most asked questions regarding the Siberian Husky… Are huskies related to wolves? In this article, I’ll cover exactly what science has to say on such a popular question.

Husky vs Wolf? Let’s dive in!

Are Huskies Related to Wolves? The Scientific Answer

Is a husky a wolf? According to science, the Siberian Husky is not technically a wolf and they’re two separate breeds of animal, despite sharing 98.8% (and in some cases more) of the same mitochondrial D.N.A.

Despite looking much more like a wolf than most other dog breeds, the husky isn’t that much more closely related to wolves than say, a sausage dog!

Although, many argue that domesticated dogs should be its own species. Source

Originally, science thought that dogs were a direct descendant from the gray wolf. But a newer study suggests that dogs evolved separately from a common ancestor, the prehistoric wolf. The family tree is complex and a lot of subgroups of the prehistoric wolf went extinct. It still isn’t clear exactly which group of wolves are responsible for our dog breeds today.

When did dogs split from wolves?

From a 35,000-year-old ancient wolf rib bone found in the Taimyr peninsular in northernmost Siberia, scientists have found that dogs split from their wolf ancestors at least 27,000 years ago.

Before knowing this, scientists thought that the dog-wolf split only happened around 16,000 years ago. Source (livescience.com)

This separation point isn’t to be mixed up with domestication. The original domestication point has not been discovered and remains a complete mystery. Although there is no clear date, science has discovered dogs and people being buried together up to 14,000 years ago.

Popular Articles on My Happy Husky:
13 Signs That Your Husky Actually Loves
How To Completely Train a Husky Puppy

Let’s take a look at the similarities and differences of huskies and wolves with this breed comparison chart.

There are a few clear visual similarities between huskies and wolves which is pretty much why this question is asked so much.

The huskies initial appearance does resemble a wolf. The husky has a similar-looking face structure to a wolf, along with similarly pointed ears. These two key factors are what make up the clear visual similarities between both of them.

Huskies along with wolves have two thick coats, an undercoat which sheds and a topcoat for an added layer of protection against the outside elements. These coats are both similar in look, although the coloring of the coats does vary from husky to wolf.

That’s actually about it… The differences now outweigh the similarities.

Markings and Color
Despite both of them having double-layered coats, the coloring of their coats are fairly different. Huskies have more defined color differences in the coat, especially in their face markings, whereas wolves tend to display a more gray/brown blended looking coat, more suited for survival in the wild. Take a look here.

Eyes
The above photo also displays the difference in eye color. Wolves often have yellow/amber/brown eyes whereas the huskies usually have light blue colorings. Heterochromia which huskies are known for does not happen with wolves. Heterochromia is one of the most visually striking elements of the Siberian husky.

Height
The Siberian husky is considered to be a medium to large dog. However, the wolf can be a lot bigger than any husky.

Wolves can be so large they actually hold the No.1 spot for the biggest animal in the canine family. The husky is far from holding this title. The average height of a male husky is 21-23.5 inches compared to a male wolf which is 26 – 32 and in some cases even taller.

Snout and Teeth
Wolves have a narrower and longer snout which leads to a mouth full of bigger and sharper teeth. Both of which help wolves survive in the wild. While the husky being a domesticated pet, not needing to continuously hunt and kill animals, does not need to have teeth so sharp.

Head
Although the head is similar in structure and shape, the head of a wolf if much larger than a husky. This larger head contains a much larger brain. Having a bigger brain capacity enables the wolf to have superior intelligence and allows them to survive in the wild. Our domesticated husky although deemed an independent dog, would fall very short on the survival side of things compared to a wolf.

Popular articles on My Happy Husky ⭐
● The Complete Breed Compatibility Guide for HUSKIES
● How to Completely Train a Husky Puppy | The Ultimate Guide
● Is It Ok To Pick The Runt Of The Litter? | Runt FAQ Guide
● Zinc Deficiency In Huskies | What You Should Know

Behavior and Temperament: Husky vs Wolf

When it comes to the behavior and temperament of huskies and wolves, these animals couldn’t be further apart. Our huskies are domesticated, family pets and wolves are complete wild animals.

Domestication is what separates these two animals. The Siberian husky is a warm, affectionate, social, human-loving animal who is likely to come to you for cuddles and playtime. This happens because of domestication, the process of changing the behavior, temperament, and mind of an animal to live closely with humans.

Coming to your for affection and playtime is the absolute last thing a wolf would ever do. This wild animal is built for survival and only does anything for a purpose. Domestication has not changed their brain from survival mode compared to huskies. While they may play fight, this is a way of learning to attack. Other than play fighting, wolves never engage in cuddles, as a husky would!

A very popular question asked by many is if huskies make good guard dogs? Interestingly enough, this is only asked because of their wolf-like appearance! The answer is that they generally make terrible guard dogs as they are not aggressive, protective or overly suspicious of anyone or anything. The wolf is the complete opposite. I have an entire article about huskies being guard dogs, some things may surprise you!

Let’s go through some more commonly asked questions about huskies being wolves, and wolves being huskies!

1. Is a Siberian husky a wolf hybrid?

The short answer is no. While they have unusually close (almost identical) mitochondrial D.N.A. they are still two different breeds of animals. Dog/wolf hybrids are when a domesticated dog interbreeds with a wild wolf.

Huskies and wolves can interbreed and although this is very unlikely to happen naturally in the wild, we humans love to intervein and test things. Husky wolf hybrids do exist and many people are trying their luck turning them into a domesticated pet. Huskies are completely safe towards humans, but a husky wolf hybrid is different.

The natural survival instinct to hunt and kill is deeply rooted in wolves and when it comes to anything instinctual, it’s hard to train against.

People have had mixed results trying to make a nice family pet of a wolf hybrid. You could never be totally sure that your husky-wolf would not attack you or any other small pets.

Wolves howl in the wild because the sound travels much further through the air. The howl is primarily used to locate another wolf or pack and is often used by lost wolves to find their way back. When other wolves hear howling, they will almost always howl back.

Howling is instinctual and often times huskies do the same thing. Although huskies are domesticated pets that live with us in our homes, they still have the instinct to howl, oftentimes it’s in retaliation to sirens, babies crying, other dogs, and general noises they may mistake for another husky.

4. Which dog breed has the most wolf DNA?

While all dogs have at least a 98.8% match of mitochondrial D.N.A there are some that are technically closer than others.

The top 11 most closely related dog breeds to wolf DNA are:

Hopefully, this has cleared up your question about Siberian huskies and wolves. If you have a husky-wolf hybrid, comment below! I would love to hear about them.

Most Recommended For Huskies

The Furminator Undercoat Rake and a Hertzko Slicker Brush are by far the two best brushes that any husky owner should use.

Brain Training For Dogs has become very popular with Siberian Huskies in the last few years. Owners that have tried it say amazing things about the incredible results and how easily implemented the training is.

If you would like an easy to read guide for training your husky puppy, check out my book The Husky Puppy Handbook on Amazon. All purchases are greatly appreciated.

Do Huskies Need a Companion? What Owners Should Know
← Read Last Post