Why Do Huskies Have Curly Tails? Complete Husky Tail FAQ 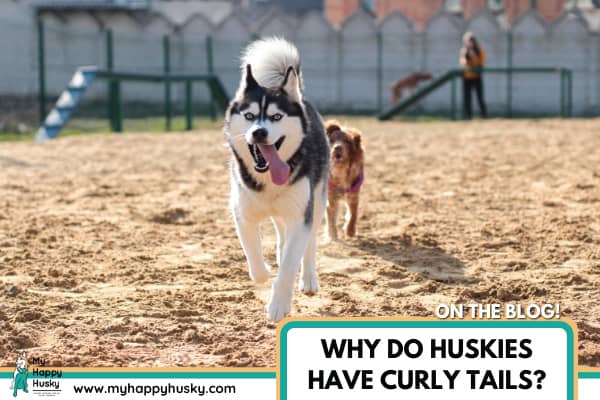 This article will explain everything about huskies and their tails. Are they curly? Do all huskies have curly tails? And what if your husky’s tail isn’t curly? Whatever your question, the answer will be below.

The Difference Between Curly and Sickle Tails

According to breed standards, huskies do not have “curly tails”, in fact, they have “sickle tails”.

This often creates confusion because we use the word curly to describe how curly your husky’s sickle tail is. I know… kinda weird. But that’s just how it goes.

“curly tail” dogs are those like Shiba’s or Pugs, which as you can see looks different from a husky’s tail.

Why Do Huskies Have Curly Tails?

Siberian Huskies are considered a northern breed and come from the Spitz genetic family.

Most of the breeds in the Spitz genetic family have curly or sickle tails, and this is down to the climate this breed originated from.

For example, Shiba’s have curled tails, and huskies have sickle tails.

Huskies were bred in Siberia and lived in arctic-like conditions for thousands of years, their furry curly tails were perfect for wrapping around over their face and head when laying down. This helped to keep them warm while resting.

This is a common trait seen in many other northern breeds that were also exposed to such cold climates.

Do All Huskies Have Curly Tails?

No, not all of them, and even when they do, the “curliness” of their tails can vary.

Some huskies will have tails that do not curl at all and could be compared to the tail of a labrador. This is usually called a trailing tail.

You will also have many huskies whose tail will change from hanging down to curling up depending on their physical and emotional state.

Tails may raise up into a sickle position from a hanging position when excited and alert. The most common example of this is when you take your husky out for a walk or for his exercise, his tail will usually be held high.

The Breed Standard of Husky Tails

The AKC has a lot to say about the tail of the husky. They even compare it to the tail of a fox.

The AKC goes on to say that the hanging tail, or “trailing tail” is normal for huskies when in repose, meaning when in a rested, or relaxed state.

And when it comes to the curl, they mention how when alert or at attention the tail should carry in a “graceful sickle curve”. This means the tail will curl a little, but not completely over the back in a tight curl.

They then go on to say that the tail should not fall over to either left or right, and should also not snap flat against the back.

This is how the AKC describes the tail of a husky.

In reality, it doesn’t matter what kind of tail your furry friend has, these are just their show dog standards.

What About Husky Puppies? Should They Have Curly Tails?

Your husky puppy’s tail will start to take shape of its natural resting position at around 4-6 months old. But this is not a strict timeline, and tails don’t set in stone!

Husky puppies can have trailing tails but they can also have relatively curly sickle tails.

It usually depends on the blood lineage and the parents of your husky puppy.

Physical traits usually pass down closely so if you were lucky enough to see both mother and father, you’ll have a pretty good idea as to how your puppy’s tail will set.

This is original content produced and published by My Happy Husky | www.myhappyhusky.com | If this content appears on any other website or platform then it is not the original and action will be taken.

This is more of a subjective question, but considering how common it is, I thought I would touch on it.

In my opinion, the word “quality” starts to lead us down an overly judgemental path.

What I think, Is that whether your husky has a sickle tail or a tail that remains hanging down or trailing, it does not mean he is less or more of a “quality” husky.

However, when discussing breed standards, and the differences of show dogs and working line dogs are clear.

The AKC outlines all of the breed standards as of “show dog quality” but if your husky is from a line of working huskies, he likely has many different physical traits from his overall size, shape, coat, paws, and yes even the tail.

You can also rule out the purebred question. Some owners may question whether a husky is purebred based on the tail he has. And while it may be an indication, that’s all it is, an indication… not a completely reliable factor.

Because as we discussed earlier, purebred huskies can have different tails, some always trailing, and some more sickle than others.

Huskies have what’s known as a “sickle tail”. This can often cause some confusion due to the fact we use the word curly to describe it. But having a curly tail is actually considered something else altogether.

Huskies may have sickle tails or trailing tails, and everything in between!

I hope I have answered your questions about huskies and their tails. If I haven’t, be sure to message me and I will review the post 🙂

The Furminator Undercoat Rake and a Hertzko Slicker Brush are by far the two best brushes that any husky owner should use.

If you would like an easy to read guide for training your husky puppy, check out my book The Husky Puppy Handbook on Amazon. All purchases are greatly appreciated.

Receive Your Own Husky Mail!

Welcome to the My Happy Husky pack.

Why Is My Malamute So Small? 4 Reasons & What You Can Do
← Read Last Post 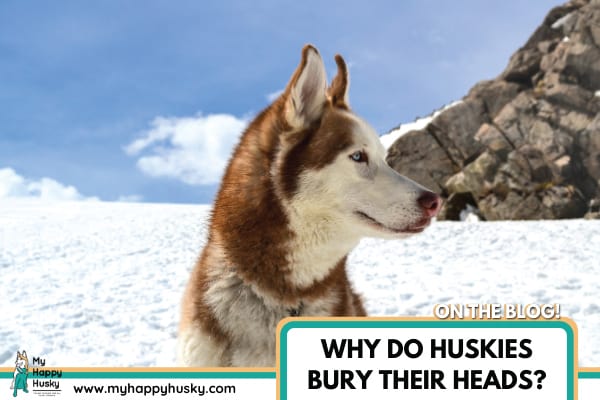 Why Do Huskies Bury Their Heads? What It Means!
Read Next Post →