Why Does My Puppy Only Bite Me? Here’s Why & What To Do! 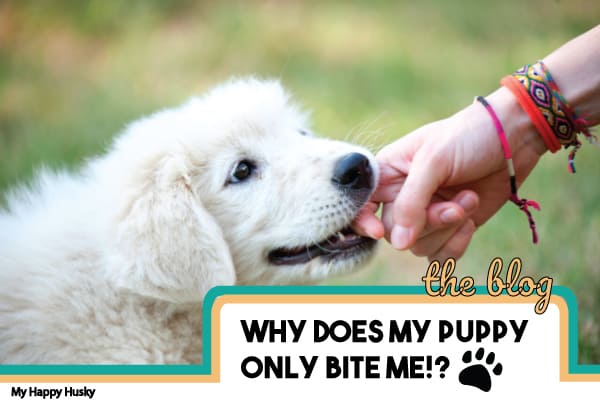 Puppies love to bite and chew, but does it seem like your puppy is singling you out? That could actually be the case, and this article will explain why your puppy bites you, and no one else.

The two most common reasons why your puppy is biting only you are that he sees you as his mother figure and that he’s still learning about his bite threshold. You could also be inadvertently making your puppy anxious when around you.

Let’s explain that in full detail and cover more points about puppy biting and what you can do.

Why Does My Puppy Only Bite Me and No One Else

Let’s elaborate on the main answer given above. And in fact, there are a few more reasons why your puppy is biting in the first place.

One thing is for sure, puppies and dogs are not mentally capable of disliking a certain person. A question I get often is whether the puppy is biting only one person because they don’t like them.

This isn’t the case, so you don’t have to worry there. It’s down to a few reasons that I’m going to explain in detail below.

1. He Considers You His Mother Figure & Testing Bite Inhibition

The most likely reason that your puppy is biting only you, is that he sees you as his mother figure (whether you’re a guy or girl).

● If your puppy was taken away from his canine-mother too early, he wouldn’t have had the chance to learn proper bite inhibition.

● When puppies are with their mothers, they constantly nip and bite them and it’s a fundamental way for puppies to learn that their bite can hurt, and how hard they need to bite, for whatever is in their mouth. This is a super important lesson for all puppies.

● Mother dogs are constantly turning around and severely telling off their offspring when they bite her too hard, although this can be unsettling to watch, puppies learn A LOT about their bite. But if your puppy wasn’t able to get that with his canine-mother, he’ll pick out who he considers to be his human-mother and do the same.

2. You Are Making Him Anxious (without knowing)

The other reason that your puppy only chooses to bite you, could be that he senses some nervous energy from you, or you’re inadvertently doing things that make him anxious or uncomfortable.

To clarify, you may be acting completely normal, but it just how your puppy is interpreting your actions and demeanor.

Ways you may be making your puppy anxious without knowing:

● Trying to hold, hug, and snuggle up close with your puppy. Puppies don’t understand affection, so when you try to cuddle him, it could actually be making him feel very uncomfortable and even slightly attacked.

● Speaking overly loud or in certain tones. Some puppies are quite timid, and we have to treat them as fragile babies. Speaking or shouting will certainly make a puppy anxious. On the flip side, puppies can get overly excited very quickly, and your tone of voice and volume may be causing hyperactivity.

● Interacting with him too much. There’s a small chance that you’re interacting/playing/speaking and showing him too much attention. Puppies see most things as an initiation to play, and he may think you’re trying to play all the time. Or it could even become frustrating to your puppy and his bites are a signal for you to let him be. When he wants to play, he’ll come to you.

Of course, you only have the best intentions and you would never want to make your puppy feel uncomfortable.

That’s a given… but sometimes we can become overly excited and lost in the fact that we’ve “just a got a new puppy!” and this energy can sometimes be too much for a timid pup.

Remember, that when puppies are removed from their mother and siblings, it can be a very stressful moment for them, so it’s important that we provide a calm environment and don’t overwhelm them with too much unfamiliar attention.

Teething is a major growth and development stage that all puppies go through.

● Teething timelines range depending on the breed and even puppy to puppy, but in general, teething starts at around 2-3 months and can last until the 7 or 8-month mark.

● During this stage, teething pains will come in waves and your puppy will be subconsciously inclined to chew and bite anything he can. This helps the teething process, massages the gums providing blood flow and pain relief.

● Coupled with the fact that your puppy will see you as his main leader/authoritative figure, it will be normal for him to come to you for his problems, this means biting you, to relieve his teething pains.

● Teething can be described as a nightmare by some owners, and it’s entirely possible your puppy will dramatically reduce his biting habits naturally after teething has stopped.

4. The Breed You Have

Some breeds are much “mouthier” than others and you may not have realised this before choosing what dog you want to get.

Of course, this doesn’t really matter in the grand scheme of choosing a dog, but it will explain a lot during puppyhood.

Most working, herding, hunting, and retrieving breeds are predisposed to bite and chew on everything they can, it’s literally in their DNA.

Breeds that are known to be “mouthy” during puppyhood:

Many of the breeds on the list also happen to be some of the most popular dog breeds in the world. It’s more than likely your breed is considered to be extra mouthy.

How To Stop Your Puppy From Biting You

Regardless of why your puppy is biting you, there are solutions, so let’s take a look them.

I want to take this moment to mention that there are RIGHT ways and WRONG ways to train your puppy not to bite. I have seen so many people give bad advice (although well-intentioned) to puppy owners including:

● ✔️ When your puppy bites you, your goal is to ignore the behavior. This means that interactions stop, playtime ends, and you no longer respond at all. Of course, you can’t let your puppy bite you so remove yourself from your puppy.

● ✔️ Your puppy should be kept in his own space anyway, so removing yourself from “his” area shouldn’t negatively impact where you want to be. Your puppy’s first room should not be your main living area.

● ✔️ If you go back to where he is and he starts nipping then remove yourself again. Be consistent.

● ✔️ When your puppy is behaving nicely with you, capitalize on this every time and praise him heavily with treats and your attention.

● ✔️ The moment he nips, the behavior is ignored, interaction stops and playtime is over.

Why Does This Work?

● This works because behavior that doesn’t generate a reaction (positive or negative) is incredibly boring for your puppy.

● He’ll learn the biting and nipping you equals NO FUN.

● Behavior that isn’t reinforced will soon end. This is a fundamental way that puppies learn.

The Importance of Your Puppy Having His Own Space

You may have raised your eyebrows when you read that your response to nipping should be to remove yourself, rather than your puppy.

This is only an issue if your puppy resides in the most important areas of your home, which he shouldn’t. Not until he is trained and well-behaved.

Puppies need boundaries and they must learn that they are not in charge or rule the household. They should have their own set area (room or puppy pen) where they have their toys, their cage, water, and everything they need to be comfortable.

So when you need to suddenly ignore some unwanted nipping, you can leave “his” area and it won’t cause you any inconvenience.

Training puppies regardless of what it is becomes a lot harder when they don’t have their own dedicated space. If they’re contained, it’s much easier for you as their leader to control the environment and their behavior.

Sure, it’s important for bonding and to occasionally let him in the main rooms and allow him to discover the house. But during his early stages, before he’s trained and better behaved, it helps for him to mostly stay in his area.

So you now know why your puppy bites only you and no one else. It’s likely that he sees you as his mother figure, and he may have been removed from his canine-mother too early. This means that he still is yet to discover his bite and what it means, so he’ll be doing that with you.

Alternatively, your puppy may be interpreting your actions and behavior as negative energy or it’s making him anxious.

If you follow the steps outlined above you should see a positive reaction in just a short amount of time. Remember that behavior that isn’t reinforced eventually stops.

These brushes when combined together will remove dead fur and maintain your husky’s coat better than doing anything else! These brushes are a simple Undercoat Rake and a Slicker Brush.

If you would like to support My Happy Husky directly and have an easy-to-read and entertaining guide for training your husky puppy, check out my book The Husky Puppy Handbook on Amazon. All purchases are greatly appreciated. 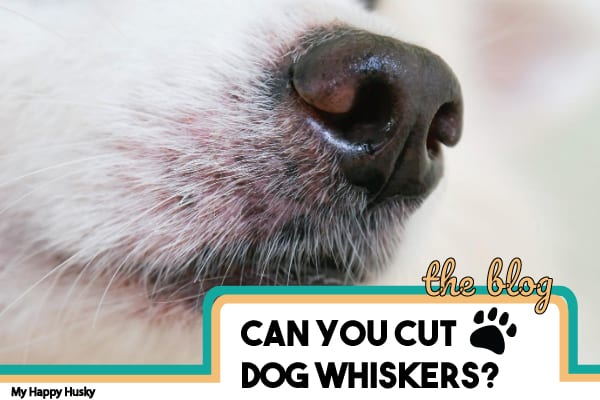 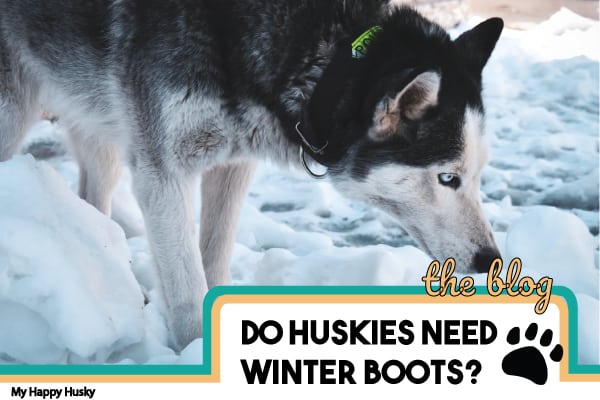